Homegoing was on my TBR for a long time. It received rave reviews, and was often front and centre of any Waterstones I walked into, so I’m not sure what exactly took me so long to a) buy it and b) read it. Let’s just say that, now I have read it, I will be recommending to everyone I can. Honestly, buy or borrow this book: it’s incredible. Not just one of my top reads this year: one of the most wonderful books I think I’ll ever read.

I’ll go into more detail about what makes this book so awe-inspiring, but first, let’s introduce the story itself.

Effia and Esi are sisters with completely different destinies. One marries a slave trader, just as the other is sold into slavery.

The consequences of their opposing paths ripple through all the generations that follow them. We are taken to the Gold Coast of Africa and to plantations in Missippi; from palaces to coal mines, and from Ghanaian missionary schools to Harlem bars.

All beginning with one woman’s choice. 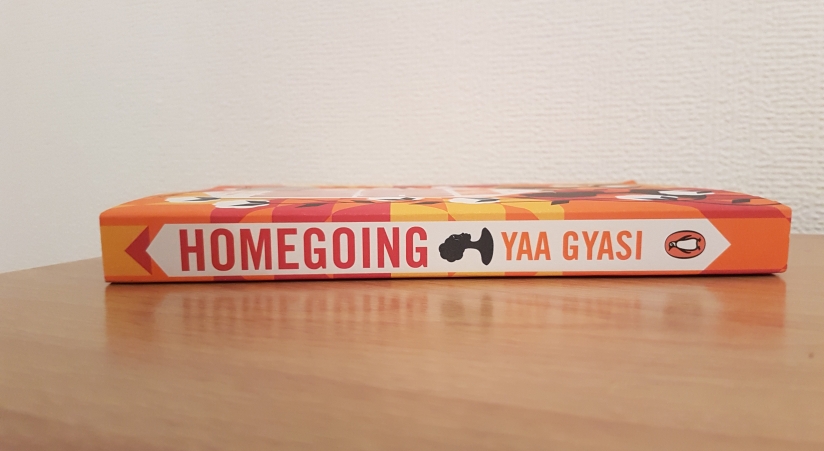 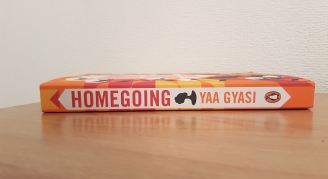 I feel like I’ve said this a lot this year, but words don’t seem to do justice to this remarkable novel. (You may well wonder what the point would be in trying to review it, but I need to at least try to explain how good this book is).

Personally, the most powerful and defining aspect of this novel is that it is not just one story or plot. Or rather, it’s the story of one bloodline, initially separated into two paths, then told through the eyes of each subsequent generation. Each chapter tells the story of someone new, alternating between the two families so that the reader is always viewing them in parallel. It creates a sense of continuity – a demonstration of the strong bonds of family and legacy – alongside the relentless progression into the future as each new voice comes to the fore. Even as characters look back on their own lives, or those of their ancestors, they are always looking to the future, looking to move on to a new, better chapter. The progression in time is matched by the movement between places, whether that’s from one African village to another, across the Atlantic on a slave ship, or simply walking the streets of Harlem. For in spite of their differing circumstances, all of these characters are in search of the same thing: home.

“[James] had known his grandfather only as a person knows his shadow, as a figure that is there, visible but untouchable, unknowable.”

Exploring what this means for each character allows us to connect with them as individuals, not simply as parts of a wider narrative. So much detail is covered within the relatively small number of pages of each chapter, creating an authentic voice and environment for the characters to inhabit. It reads effortlessly, yet when you consider the level of research and skill that has contributed to this, it is quite remarkable knowing that this is Gyasi’s debut.

There was beautiful focus on the importance of stories and storytelling intrinsic to the search for ‘home’. Stories passed on from parent to child, or between friends and strangers alike, connecting people to one another, or to places they feel drawn towards. No matter how much time passes within the novel, Gyasi shows what these stories and connections mean for individuals and communities torn from their ancestral nations and cultures.

The narrative structure also provided Gyasi the means to explore the complex and related histories of Ghana and the United States. The transatlantic slave trade has been the focus of some great works of literature: fiction, nonfiction, drama, and poetry, and Homegoing is an incredible addition to that wealth of explorations. For me, this has been my first encounter with a depiction of west Africa’s role as traders as well as slaves, and the conflict this created (in individuals as well as politically) is portrayed with great nuance.

“This was how they lived there, in the bush: Eat or be eaten. Capture or be captured. Marry for protection…He would not be weak. He was in the business of slavery, and sacrifices had to be made.” (Quey)

It originates in that literal separation of the sisters: one as a bride in the castle, walking above the dungeon where her sister is captive. The legacy of this separation lives on in their descendants, in varying and unexpected ways.

There’s no attempt to shy away from the brutality experienced by people of colour, whether during the eras of slavery or in modern day U.S.A. Again, I was struck by the simultaneous breadths and depths that Gyasi reaches in the book, forcing us to acknowledge how, in many ways, few things have changed. Racial prejudices are as intrinsic to many modern infrastructures as they were to slavery’s, and the cost and effects of that are equally as traumatic.

“Sonny had been trying to get away from white people for as long as he could remember, but, big as this country was, there was nowhere to go…The practice of segregation still meant that Sonny had to see white people sitting at the front of every bus he took, that he got called “boy” by every other snot-nosed white kid in sight. The practice of segregation meant that he had to feel his separateness as inequality, and that was what he could not take.” (Sonny)

Homegoing is therefore both beautiful and raw; poignant and important. The impact of one woman’s choice branching out through time, across lands and seas, makes for a uniquely compelling book that is truly unforgettable.

*Homegoing by Yaa Gyasi was first published in the U.S.A. by Alfred A. Knopf in 2016