In Social Creature, Tara Isabella Burton invites us on a whirlwind ride through the decadent glamour of New York City’s young, elite circles. It’s a world so full of extravagance and artifice, all sense of reality slips; an experience taken further by the constant need to photograph and caption it all, to manufacture poses, scenarios and impressions to gain those all important ‘Likes’ (always capitalised in Social Creature). In spite of our awareness that all is not what it seems, we cannot turn away – just as Louise cannot turn her back on the world, so unlike her own, that she has unexpectedly been drawn into. 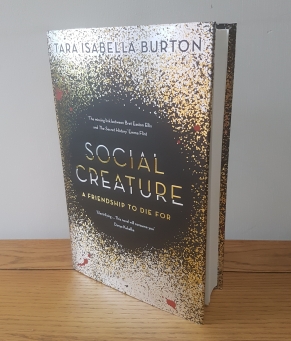 Louise is increasingly losing her sense of purpose – her sense of self – in the relentless environment of New York City. At 29, her hopes of being discovered as a fresh voice on the literary scene are dwindling, not least because working 3 jobs to afford the rent leaves little time to actually write. One day, she receives a call about her tutoring service – and nothing is ever the same after that.

The caller is Lavinia. It soon becomes clear that the sister she arranged a tutor for needs no assistance – Lavinia just wanted to make sure it looked like she wasn’t abandoning responsibility while she went out to a party. On an ever-extending sabbatical from Yale university subsidised by her parents, Lavinia knows that there are few doors that money can’t open for her.: attendance at exclusive parties, her own blends of perfume and imported teas, introductions to other rich and powerful figures who can ‘make things happen’. It can even attract people to be her friend (or at least, people who will take pictures with and of her to be posted across social media).

That’s where Louise fits in – and though she’s always aware of her precarious role in Lavinia’s life, she sets aside her discomfort for the opportunities the friendship offers her. Wearing borrowed clothes and having drinks ordered on Lavinia’s tab, Louise is soon mingling with the literary circles of New York City that had been so elusive to her before.

Burton tells us from the start that this will not end well – that the toxicity of this relationship will become too much to bear. She takes us on the journey to find out how and why devastation strikes, and to discover what happens next.

This novel is deceptive. It reads so easily – it’s light, dazzling, with a quick pace that matches the unrelenting movement of the characters. They are at the opera; now at a cocktail bar, next, a literary salon, followed by an exclusive party – they are always ‘somewhere’. There’s an ‘instant-ness’ to everything that mirrors the way the characters rely on social media to relentlessly ‘update’ their stories, Yet there is also a dark current coursing through the writing that slowly but surely creeps closer to the surface, chipping away at the shiny, glittering veneer of Lavinia’s society until they overflow.

For me, the most fascinating thread of the book was the exploration of storytelling in the social media age: the stories we tell to and about each other, our world, and ourselves. Burton understands that we are constantly creating and curating our own narratives in words, images, check-ins, GIFS, emoticons, and any other means that our chosen platforms recommend. She shows how liberating this can be – and how dangerous. Social Creature is a tale of obsession and possession for the technology-driven age where having access to someone’s phone means more than taking away a communication device. It could, in the wrong hands, offer a chance to control someone else’s story, their entire public image.

Bombarded by unceasing messages and status updates, Burton’s characters miss all the signs that things are not quite right with Louise and Lavinia’s relationship.

I loved how cinematic the writing was as well – in many ways using the aesthetics of apps like Instagram to enhance how the story is filtered to us. “Here’s the thing – ” is a refrain used throughout. It acts almost as a freeze-frame would in film and television shows, where the narrator pauses the plot to fill us in on the rules and reasonings of the toxic and fascinating world on show.

Louise and Lavinia are compelling characters and the interweaving of their lives makes for an incredible story. There’s no shying away from their flaws or mistakes – and believe me, there are many. In fact, I’d say that Burton revels in taking us to the extremes of these women’s personalities, and laying it all open for us to see. Their lives seem so different at first, but it becomes clear that they share more than a similar (freshly dyed) hair colour. Both lack security in their own identities, and so look to external factors for it – inappropriate romances, money, ‘Likes’ on status updates.

There are some difficult aspects of life covered in Social Creature – struggles with mental health and toxic relationships (platonic, romantic, and sexual) being the most prominent. As such, it may not be a book that everyone will be comfortable reading – it’s not necessarily graphic, but characters do find themselves in some upsetting situations.

For me, I certainly found Social Creature to be thrilling, as well as interrogative of aspects of our obsession with being online. With echoes of The Great Gatsby and Gossip Girl that are brought forward, reworked, and added to, this is a captivating tale of a female friendship that spirals out of control with devastating consequences.

Thanks for reading my review!

*Social Creature, written by Tara Isabella Burton, is published in the UK by Raven Books, an imprint of Bloomsbury Publishing.

**I first read Social Creature in serialised form via The Pigeonhole. I won my hardback copy from The Pigeonhole after taking part in their social media competition