I have a lot to say about this novel. I’ve tried to keep this as spoiler-free as possible, but there’s so much packed into the book that I loved and I couldn’t not talk about them all. So, here goes.

The Day of the Girls. The day that 14 and 15 year old girls across the world discover they have a power. The Power. A pure power, residing in a skein stretching across their collarbones, that allows them to release electric jolts from their finger tips. They can hurt, even kill, anyone with this power.

Online videos proliferate of these girls using this power for the first time. It takes a while for everyone – girls, boys, parents, politicians, media networks – to accept that this is not the result of witchcraft or nerve gas or part of anti-male activism. They have to adjust to this permanent, ‘natural’ occurrence. The first thing that happens is moving boys into separate schools for their safety – there are accidents when girls lose control.

Soon enough, though, they learn to manage their power. That’s when change becomes truly unstoppable. Using many of the fetishised aspects of femininity – their connections to nature and intuition, their dangerous and unpredictable sexuality – Alderman imagines how a natural power within women would lead to the inversion of all power relations in society.

While men continue to rely on guns and knives, girls learn how to use their minds to release electrical jolts in various degrees of strength and speed, awakening the power in older women, and using natural elements to their advantage. The electrical jolts they release allow them to dominate sexual interactions – they can control a man’s body to please or to inflict pain. Abused, oppressed, and silenced women turn on their attackers, including governments and authorities. As women seek the origin of their liberation, a new religious leader points them towards a feminised faith:

“Jews: look to Miriam, not Moses … Muslims: look to Fatimah, not Muhammad. Buddhists: remember Tara, the mother of liberation. Christians: pray to Mary for your salvation.”

All of this is presented as a page-turning, non-stop adventure around the world, through the experiences of four central characters. Allie, a lonely and abused foster child from America vanishes into the night, guided by the voice in her mind to rise from the ashes like a phoenix in a new guise. Roxy, the often disregarded daughter of a London crime leader, realises her Power is almost unique in the world. After cashing in on his videos of initial ‘attacks, young Tunde leaves Nigeria to make his living as a reporter, travelling across the world to document the changes occurring. Margot, an American Mayor, realises that she can successfully negotiate her political rise to power using the instability caused by the seismic shift in the social order.

A central thematic image employed in this novel is that of a tree, which is ‘the shape of power’:

While effective for visualising the spread of power in general political and social relations, it is highly significant for the understanding of gender that has been passed down through generations, loaded as it is with Biblical symbolism. It was from a tree in the Garden of Eden that Eve picked the forbidden fruit of knowledge and, by tempting Adam, forever damned her descendants with the ‘sin’ of femininity.

Structurally, too, the image of the tree is present, with characters acting as branches of the novel’s ‘trunk’, the awakening of ‘The Power’. As the characters follow their individual paths, sometimes connecting with or overlapping one another’s stories, we follow different reactions to the changes being felt across the world, in the most powerful of countries and the most isolated of communities.

The engagement with current social ideas and concerns in Alderman’s speculative, alternate reality is really effective, particularly the conflicts arising in our era of portable technology. It can be used to spread messages of hope and of fear, which can unite and divide communities. Although there is a need to document and bear witness to the truth, however horrifying that truth is, the uncomfortable voyeurism and monetary profits stemming from recording violence and trauma is unavoidable. We see conspiracy theories and radical movements gain momentum online. Politicians, criminals, and religious orders alike acquire social power from this moment of fear and uncertainty, knowing that desperate people are searching for answers and escape.

Some moments in the novel are incredibly emotive and fairly graphic, as we learn that for some, there are no lengths they will not go to for control. The awakening of a biological power in women strips people bare, exposing their motivations, limits and beliefs as it overturns all assumed truths about how we understand our world. 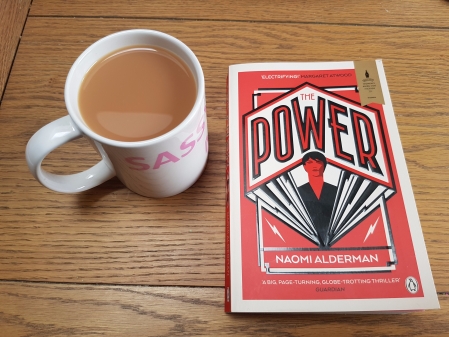 I adore how Alderman takes the imagined reversal in gendered power relations into every aspect of the book, which is itself presented as a historical novel written by ‘Neil Adam Armon’ thousands of years in the future. There are drawings of archaeological discoveries, reports from scientists, transcripts from documentaries – many of the documents we use to form our understanding of the past (and record the present for future generations). Included as bookends of the novel are Neil’s correspondences with ‘Naomi Alderman’, whom he has asked to critique the manuscript. It’s clear that Alderman had great fun writing this particular section, suggesting to Neil that since ‘anything you do is framed by your gender, that the frame is as inescapable as it is nonsensical’, he should consider publishing his book under a woman’s name to avoid being solely assessed within the genre of ‘men’s literature’.

I think this is one of my favourite aspects of the work – that it’s highly conceptual but never loses the playfulness, or the excitement of a thrilling plot. Alderman negotiates the fine line between engaging with social ideas and preaching to readers very well, which reveals her great skill as a writer. For while she takes the inversion of norms to often gruesome extremes to expose the emptiness of gendered concepts and ‘the power’ they exert in organising social relations, the plot and characters she creates remain nuanced and exciting. Isn’t that what most of us want in a good book?

There were some rather odd bits of dialogue – not quite colloquial or cliché, but they just didn’t seem to fit with the rest of Alderman’s style in this book. It didn’t affect my overall enjoyment of the work, but my reading felt interrupted and disjointed as I tried to figure it out. (I wonder if anyone else who has read it noticed the same?)

I genuinely think this book will have lasting success and impact, and will be considered a ‘classic’ in the future. It’s a masterful combination of form, structure, plotting, and characterisation grounded in one question:

How would the world look and function if women had all of the power?

Apologies if I did give away any spoilers!

Feel free to comment below if you have any thoughts on this novel!