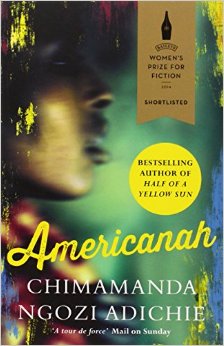 I love being an English Literature student for many reasons, but the main one is this: I get to read some truly fantastic literature that would not have crossed my path had I not been on this course.

Americanah is the latest of these revelations. Since reading this novel, I have noticed how prominently Adichie’s work is placed on the displays in many book shops. Her debut novel, Purple Hibiscus (2005), received wide critical acclaim along with numerous shortlistings for literary awards, Half of a Yellow Sun (2006) won the Bailey’s Women’s Prize for fiction, among others, and Americanah was named as one of the Ten Best Books of 2013 by the New York Times. In spite of all this, I’m almost certain that Adichie’s fiction would have gone under my personal radar if it had not been featured on the reading list of one of last semster’s modules, which meant I would have missed out on some amazing writing.

Americanah begins with Ifemelu visiting a hair salon to get her hair braided in preparation for her move back home to Nigeria, after 13 years living in America. The decision to move has come as a shock to many of her friends and relatives, and to Ifemelu herself – she has ended a relatively happy relationship, shut down her highly lucrative blog, all to move back home with no motivation other than that it feels like what she needs to do.

As she sits in the salon, Ifemelu emails her teenage love, Obinze, now a successful property developer in Nigeria, with whom we are told she cut off all contact many years ago. This prompts a sequence of prolonged flashbacks (and flash-forwards, back to the present but also to some scenes in the not-so-distant past), which tell us the story of how she arrived at this moment, contemplating seeing her home again.

Adichie presents us with a Nigeria that is forward-looking and ambitious, producing a well-educated youth in spite of the political upheaval of the 1990’s. Even those people who do not attend university have hopes and dreams, and the motivation to succeed in those dreams (even if, for some, that means breaking the law – there are no rose-tinted glasses used here). This is not the Nigeria – seen through the eyes of her American characters and the global media – constantly in need of charity. Nigeria, and Africa more generally, is a vast and varied landscape. Yes, there are people living in poverty, but there are those, like Ifemelu, Obinze and their school friends, who have been taught to work hard, to dream of success, with the final goal being America, or England.

We see America as a place to achieve freedom, success and independence. The American Dream lives in all its glory and splendour in the minds of those who see it from afar. Ifemelu gets a scholarship to study in Philadelphia, leaving Obinze to finish his degree in Nigeria, planning to join her later. Alone, however, Ifemelu discovers an aspects of America that nowhere featured in her imagination, an America she wished had remained hidden. Her experiences lead her to suddenly cut off contact with the one person who had grounded her, made her feel hopeful for the future and safe in this foreign country: Obinze.

Obinze, confused and hurt, fails to get his American visa after graduation, moving to London in the hopes of somehow finding success, or at least a new path to America, there.

This is almost a ‘coming of age’ story – it’s a novel about the experiences one goes through in order to find or understand your true self, and what really makes you happy. For the Nigerian characters, this is especially important, caught as they are between the ties of home and the belief, instilled in them from childhood, that real success is something only achieved abroad.

It’s also a story about questioning our own understanding of the world and the people around us. Ifemelu is shocked, upon arrival in America, to ‘discover’ that she has a race. She is looked at differently, treated differently, not because she wasn’t born in America, but because she is black. She learns that there are words that are supposed to offend her because she is black; there are things that she is expected to do and things she is not supposed to do, because she is black. These observations become the subject of her blog. As an outsider, someone who arrives in America as an adult and is given this role to play, she questions the rules and regulations that others simply accept. Adichie places us next to Ifemelu, forcing us to question behaviours with her. We see the political rise of Barack Obama, and the implications this has for American society, through Ifemelu’s critical eye. We see the uneasiness with which race is contemplated and talked about (or rather, not talked about) in America, in the desperate attempts to make everything seem OK. Ifemelu encourages the readers of her blog to simply listen to someone if they tell a story about how race has affected them, and through listening, and asking questions, to understand the world better, by seeing it from someone else’s point of view.

The novel isn’t a grave preaching, however. It’s a hugely funny book, mainly achieved through the tone of the observations Ifemelu makes and the interactions between characters, all of whom are crafted magnificently. We understand each character, even if we become critical of their behaviour. Even Ifemelu is not drawn to be the perfect, objective observer – Adichie shows us her flaws, her selfishness and her snobbery, her tendency to judge too harshly.

This is what made the novel so real, so vibrant and so ceaselessly interesting for me. No, it’s not an adventure novel: there aren’t many cliff-hangers or dramatic showdowns. It’s a page-turner in the sense that we exist so much ‘in the moment’ with these characters, moving slowly with them through their encounters with new environments and new faces, that we just (for want of a better phrase) drift along, thoroughly engrossed, invited to care about how these stories will unfold.

Americanah is a novel about dealing with race, about politics, and the harsh realities of life, both in Nigeria and as an immigrant in America or in England. But it’s also a story about love – romantic love, the love between parents and children, love between friends, a love of home. Most importantly, it’s about learning to love and accept yourself. For that, it’s an extremely positive novel, and on reading it a second time, I enjoyed it even more.

I always think that the sign of a good book is if you’re immediately impatient to read the author’s other work.

Mentally, I’ve already packed Half of a Yellow Sun in my holiday suitcase.